The area offers almost too much to mention. You can travel to the 60 km large reservoir “Rio do Zêzere”, where you can go swimming. There are good possibilities for hiking and cycling (only for trained cyclists). It is important to take good walking shoes. In our bar we have 2 large folders containing comprehensive information for trips that can be made.

Below you will find a list of cities that are reachable from our location: 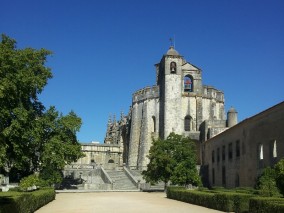 Tomar, city of the Knights Templar

Tomar, city of the Knights Templar of Tomar is located in Ribatejo (literally: by the river Tagus), the river that crosses the city is called Nabao incidentally. When the Moors got Tomar in hands, she was entrusted to the order of the Templars. In 1160, the Grand Master of the order, Gualdim Pais, ordered the construction of the gigantic castle and convent, the Convento do Christo, certainly worth a visit. Tomar has a beautiful and cozy old centre where you can find banks, post office, train station, many shops, restaurants, cafes and terraces. Just outside the centre there are several large supermarkets. On Friday morning the is a big market near the city center. Then there is the Museu dos Fosforos, a lucifer museum with a huge collection to lucifer boxes.
. 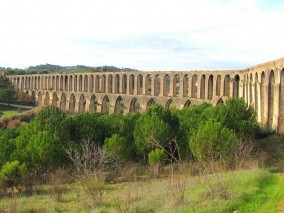 Four kilometers Northwest of Tomar you will find the remains of the Aqueduto Pegòes Alto (1593-1614 by the architect Filippo Terzi) that arranged the water supply of the monastery. The aqueduct is 5 km long and counts 180 arches. A number of kilometers east of Tomar is the Barragem do Castelo de Bode, a reservoir in the Rio Zézere. The dam is 115 m tall and 400 m long more is accessible for boaters and anglers. The cruise boats leave at the harbour of Pousada for trips of two or four hours.

Just outside Vila de Rei you will find the geographical centre of Portugal. This point is located at 600 meters altitude and gives a breathtaking view of the entire environment.

The Abbey of Santa Maria da Vitoria (14th-16th century), is a Portuguese Gothic masterpiece and is ranked on the UNESCO World Heritage list, This abbey is a reference point in the Portuguese architecture. Special attention deserves the chapel of the Fundadores (founders) with its beautiful stained-glass Windows, patio with galleries, the Manueline Chapel and Grand Foyer. 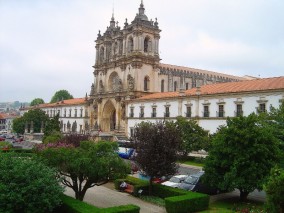 The monumental Abbey of Saint Mary was founded in 1152 (listed on the UNESCO World Heritage list). In the Abbey you will find Gothic tombstones of King Pedro I and Ines de Castro, the kappitelhome and the huge kitchen. Churches: Misericorida (with renaissance portico and 17th century tiles) and Conceicao (17th century).

In Leiria you will find a wonderful Royal Castle overlooking the lovely town of Leiria. Other important monuments are the Cathedral from the 16th-18th century (located inside an archaeological museum), the Sao Pedro Church (Romanesque), the Nossa Senhora da Pena Church (Gothic) and the sanctuaria of Nossa Senhora da Encarnacao < (16th century). 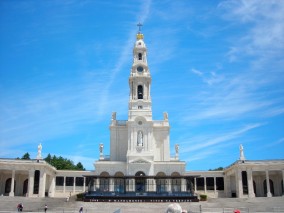 Fatima is worldwide known pilgrimage and is visited by many pilgrims . It is built on the place where the apparition of the Virgin Mary in 1917 would have occurred to the three shepherds.Fatima includes a Basilica, the Capela das Aparicoes and a huge square, which on the eve of May 13, turns into a gigantic display of candlelight. 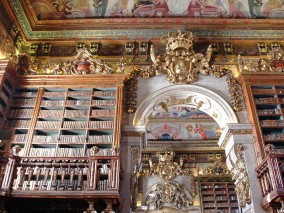 Coimbra is one of the oldest university cities that has kept it centuries-old traditions such as the students with the black cape, the fados of Coimbra and the burning of the faculteitskinten at the end of the studies (das Fitas Bonfires). The University with its mighty Tower and its beautiful Baroque library overlooks the city. In the nearby city quarters one finds the Romanesque cathedral and the Machado de Castro museum with its Roman Crypto porch. In the old streets with their medieval walls, their vaults and stairs are the Abbey of Santa Cruz (founded in 1131), the Church of Santiago and the monastery of Celas (13th century). On the other side of the River Mondego stands the monastery of Santa Clara-a-Nova (Baroque, 17th century). 16 km to the South lies the most important Roman ruins of Portugal, in Conimbriga, 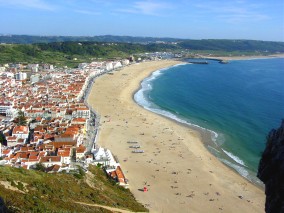 You like to spent a day at the beach? Nazare is a beautiful fishing town where the fishermen and women in costumes are drying the sardines on the beach. This is a tourist centre, and it has one of the widest beaches of Europe. Here you will also find one of the biggest casinos of the Iberian Peninsula.

In Lousa you will find an old paper mill which was opened in 1716. The paper mill still works and is situated on the wooded banks of Arouce. A walk through the village takes you along beautifully ornate chapels and residences of nobles. The paper mill had paper makers from Germany and Italy in service, this brought prosperity in the area. Palacio dos Salazares is the most interesting House to see for tourists. 3km south of Lousa you will find the Castelo de Arouce. This this was built in the 11th century by King Arunce who was on the flight for the looters. At the Town Hall, one can obtain permission for visiting Castelo de Arouce. 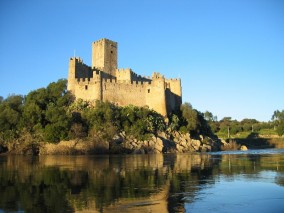 Abrantes has many fortifications, the dilapidated fort that overlooks over the city dates from the 13th century. Santa Maria do Castelo is an old church and lies within the walls of the fort. Castelo do Almourol, a fairytale Castle built on an island in the Tagus River. There are many stories about what has happened here from the 11th century, so there is the story that the spirit of a princess is in the castle waiting for the love of a Moorish slave. Despite all attacks the Castle is still in good shape.

The following attractions can be found here:

Santarem is the (Agricultural) capital of Ribatejo. This city was an important place for Julius Caesar, the Moors and the Portuguese Kings. The following attractions can be found here: